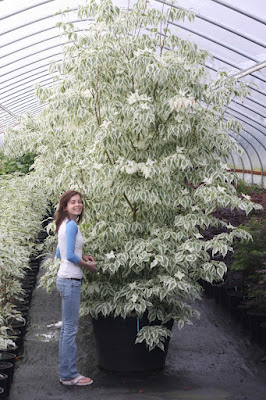 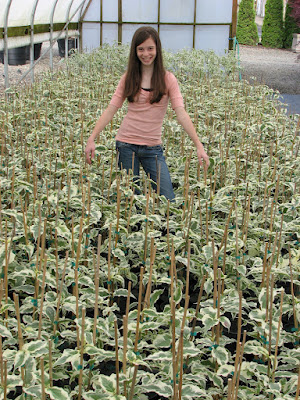 A couple of years ago I hosted a noted plantsman, one who has since gone to the dark side with his current employment, so I won't say who he is. But as we passed a greenhouse full of Cornus kousa 'Summer Fun', he commented that it was arguably my best plant introduction. Well, I certainly "could" argue with that statement, since I am frequently inclined for contention, and besides, I bristled at the suggestion that my horticultural career can be reduced to the mention of one plant, that 'Summer Fun' was the best of Buchholz.

'Summer Fun' is truly wonderful of course, and the majority of nurserymen can't come close to it with their introductions, if they have any at all. But I'll devote today's web log to make a case for some other Buchholz introductions, and you can decide for yourselves. 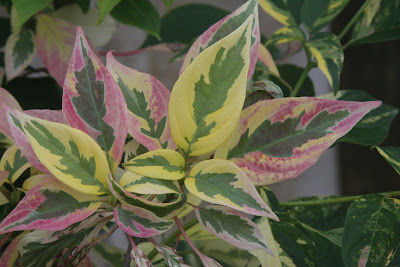 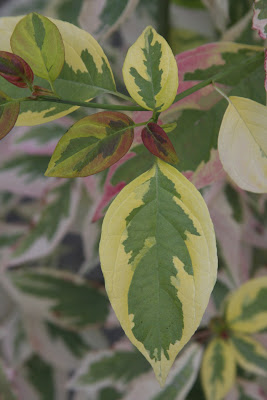 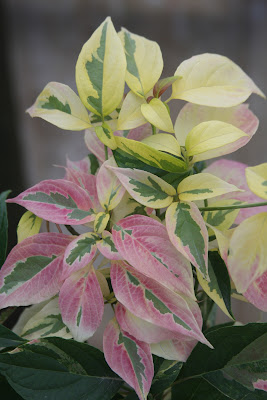 Cornus alternifolia 'Saya' is a gorgeous variegated dogwood that was named for my daughter. The Japanese translation means a "meadow of flowers." It was discovered as a branch mutation on a green seedling that was designated as a rootstock, the same as was the discovery of 'Summer Fun'. 'Saya' displays yellow, green and white variegation, indeed a meadow of flowers, with every leaf seemingly different in coloration. The best is saved for last, however, as fall color can become rich pink to deep maroon.


Another beautiful variegated "Pagoda" dogwood is Cornus alternifolia 'Moonlight'. It is similar to Cornus alternifolia 'Argentea', an old cultivar that has been around forever. The difference is that 'Moonlight', besides having a more beautiful name, tends to show a pinkish-red blush to the leaves by mid summer. (The photo above was taken yesterday). I don't know if 'Moonlight' will ever become common-place, but why not?

An aside: I'm a fan of word origins, as my web log readers know, and also the lore of plant names, either botanical or common names. "Dogwood," originally referred to a "dog-tree," which was in the English vocabulary by the mid 1500's, and was also known as the "hound's tree," and its fruits were known as dogberries or houndberries. Unfortunately, I can't figure out why a European species has anything to do with hounds. But another dogwood theory is that the word was derived from "dagwood," for its hard stems were used to make "dags," or daggers, skewers and arrows. The wood was used to make tennis rackets and the heads of golf clubs, while pioneers used the twigs to brush their teeth. The term "dogwood winter," known in the American southeast, refers to a cold snap in spring, as farmers believed it was not safe to plant their crops until after the dogwoods blossomed. Sorry, I have really digressed from Buchholz introductions. 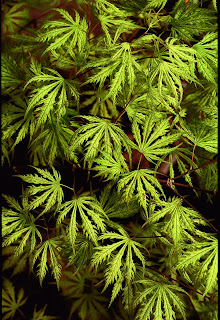 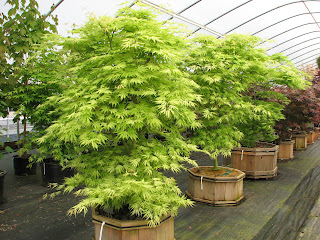 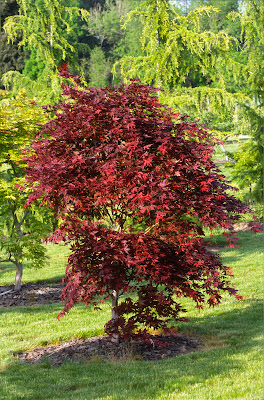 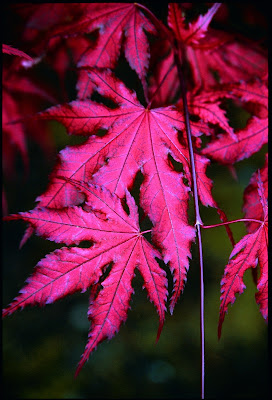 
The origin of the word "acer" is interesting as well, which was revealed to me by a professor from Ghent, which is the opening line of a lewd limerick, but I won't go into any of that now. Our "ghost" series of maple introductions have been around for a number of years. Their worthiness and popularity are now fairly well defined, with 'Purple Ghost' being my best seller (and probably for other growers as well). 'Amber Ghost' is loved by many, and is known as the best grower of them all, for it produces a uniform crop with a vigorous well-shaped canopy. 'Sister Ghost' and 'First Ghost' are wonderful for the collector, and although they can take full sun, we do not field grow them, for they are dwarf bushes that do best in the greenhouse. The other ghosts are not my best.

The first ghost to be discovered and named was, well, 'First Ghost'. It occurred as a branch mutation on Acer palmatum 'Aka shigitatsu sawa', where the light-colored leaves sat atop the host tree. One night, with visibility coming solely from the moon, it seemed an actual ghost was hovering over the tree. All of the other ghosts arose from seedling discoveries, with 'Purple Ghost' coming from the mother tree, Acer palmatum 'Kasagi yama', which resulted in a new cultivar much improved over its parent. The pollinator is unknown.


Someone asked me five years ago if there would be more ghosts added to the series. My answer was "No, we are now post ghost." Consider Acer palmatum 'Mikazuki' as a post ghost cultivar. This wildly-colored maple originated as an impossible-to-miss seedling, but of unknown parentage. The original tree sits in the middle of greenhouse 23 with an active bird's nest in the canopy. It's sort of in the way and I think I'll put it in the garden this fall. As is often the case, the cultivar on its own roots is smaller and more weak than the grafts from it.

That is certainly the case for Acer palmatum 'Fairy Hair'. The original tree now sits in a New Jersey garden, and I hope the owner--a nice guy who had a bad case of maple fever--gets a lifetime of enjoyment from it. But we have a couple of grafted specimens that are now twice as large. The taller of the two is billed as the largest 'Fairy Hair' on earth, and for me it is as magnificent as my redwood champion in California, the Grand Canyon, and, as one person suggested, my huge ego. 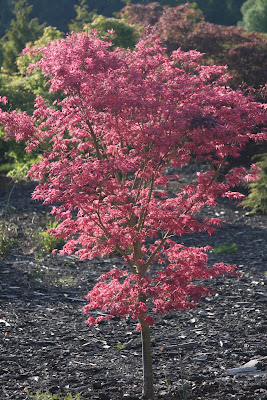 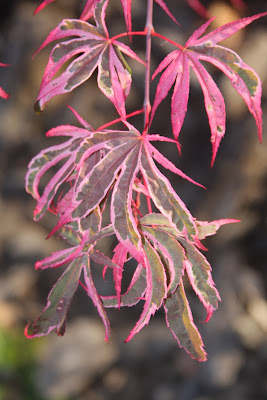 Acer palmatum 'Geisha Gone Wild' is a spectacular new maple, and it arose as a branch mutation from Acer palmatum 'Geisha'. 'Geisha Gone Wild' is far stronger than the wimpy parent, 'Geisha'. Multi-colored leaves are purple-pink, light-pink, white and green, with purple-orange in the fall. Both photos above were taken last July at 6:30 in the morning, while I was on my way to work. The landscape was aglow with its fire, and it would have been shameful to sleep in and miss the show. We produce a fair number now, but have been sold out every year for the larger specimens. Customers of our mini-box and maple programs are frequently pleased that we include 'Geisha Gone Wild' and other maples mentioned today.

Acer shirasawanum 'Kawaii' is the first red full-moon laceleaf, at least that I'm aware of. Or, I should say "reddish." It must be grown in a good deal of sun for best color, which I describe as "orange plum-red." I've grown thousands of red palmatum laceleafs, where there's not much difference between cultivars, but none of them look as fresh as 'Kawaii'. The name means "cute" in Japanese. No serious maple collection can be without 'Kawaii', but it will never reach mass-market status because it is too slow; therefore less profitable for growers. But I've never judged anyone's plant introduction worthiness by how many are sold. The degree to which the world's best plantsmen react to a new cultivar is what matters to me. Also, it's fun when a gardening novice gets excited by my cultivar, like 'Kawaii'.

How about some conifers? Remember the purpose of this web-log: to challenge 'Summer Fun' as my legacy, my epic achievement. 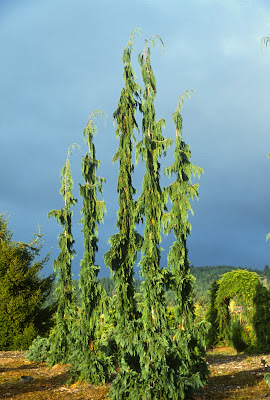 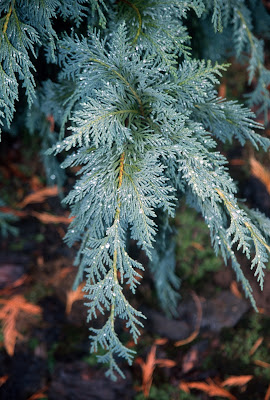 Chamaecyparis nootkatensis 'Green Arrow' was discovered by the late Gordon Bentham on Vancouver Island, Canada, but I introduced it to horticulture in the mid 1980's. It's now grown by the thousands, and I wouldn't be surprised to find it offered at the home depot-type stores, retailing at one half my fair wholesale price. Some of my original grafts still exist in our Blue Forest, and they could perhaps be the tallest in the world. It is an excellent cultivar, as it makes a "vertical exclamation point in the garden." I'm the origin of that quote, but I've since seen it used by others. 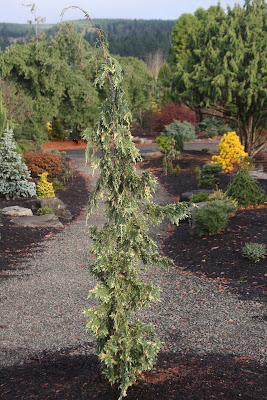 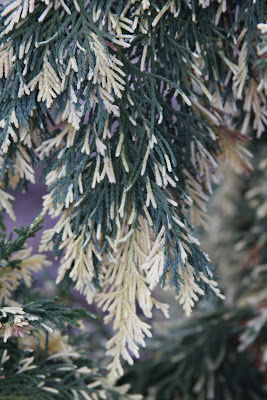 Two years ago we finally introduced a branch mutation of 'Green Arrow', a variegated tree with the same form, called 'Sparkling Arrow'. This pretty conifer actually looks best in winter, and to date, none have ever reverted like the old, useless 'Variegata'. It took forever to build up our stock because a six foot tree might only have a couple of vigorous, dominant scions, those needed to insure one gets a skyrocket-type tree. I'm already dismayed by one company that is grafting 'Sparkling Arrow' with tiny side shoots, obviously without regard to what these will grow into. 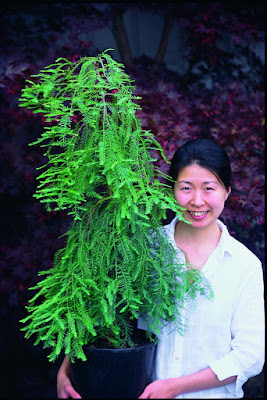 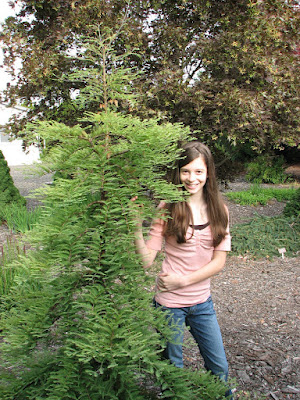 
Metasequoia glyptostroboides 'Miss Grace', an elegant weeping form of "Dawn Redwood," was discovered as a prostrate witch's broom. The original grafts were staked up by the crew when my back was turned. No, No!, I thought, for it was supposed to be grown as a groundcover. Well, it can be; but I left these few plants on their stakes, and they turned out to be neat weeping trees. 'Miss Grace' is no longer rare, as many nurseries are growing it. One thing I've noticed is that girls like it. The photo above--without the girls--is one of the original grafts, and likely the largest 'Miss Grace' anywhere.

I'm tempted to continue with other introductions, but I suppose I've already made my point. Cornus kousa 'Summer Fun' is a great plant, but many of these others are as well. What do you think?

Posted by Talon Buchholz at 1:51 PM